Posted on December 30, 2018 by Katherine Seppings

On 18 Feb 1825, the Kings of Arms, under Crown authority, granted and assigned a coat of arms and crest to Sir Robert Seppings, ‘to be borne and used for ever hereafter by him and his only brother Lt John Milligen Seppings and by their respective descendants according to the Laws of Arms.’

The unique coat of arms consists of a crest on a wreath with a half seahorse adorned with a blue naval crown and holding between its fore fins, a triangle; a shield containing a trident and an ancient galley with oarsmen (a slender warship used by the early Greek, Phoenician and Roman naval powers), above two seahorses holding between their fore fins, a Triangle sable; and at the base, the motto IMMOTUS – the Latin word meaning immoveable.

Sir Robert Seppings petitioned a grant of arms after he received the honour of knighthood on 17 Aug 1819 on board the Royal George yacht ‘under sail, the royal standard flying’ (Heralds’ College), and following many other honours in England and the Continent. The Emperor Alexander of Russia, the kings of Denmark and Holland, all presented him with valuable gifts to mark their appreciation of ‘his various improvements in the constructions of ships of War relative to their form economy and durability’.

The coat of arms, painted on the parchment vellum with the Royal Seals and handwritten Letters Patent – addressed to anyone in the world to whom it may be presented – was mostly used as a seal on legal documents. 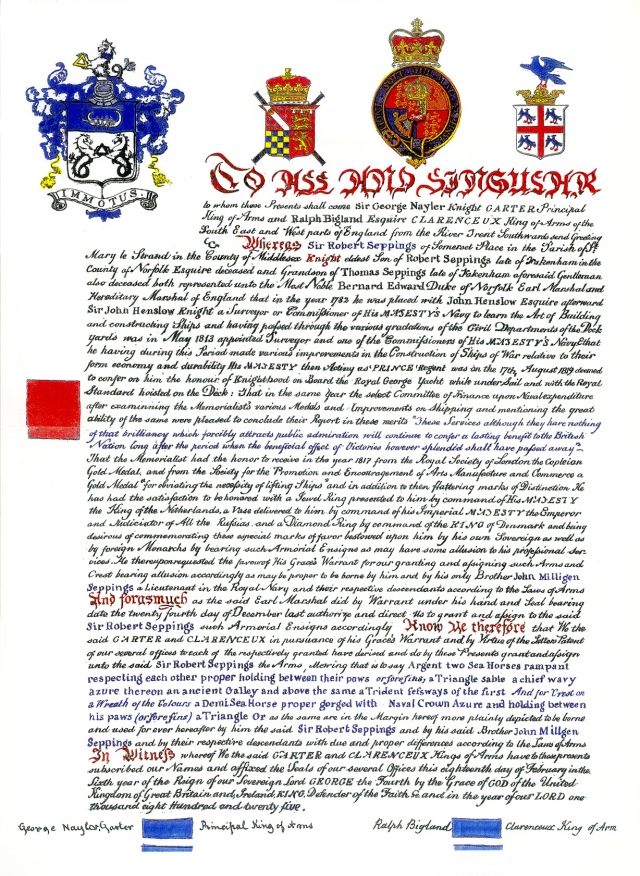 TO ALL AND SINGULAR
to whom these Presents shall come Sir George Nayler Knight GARTER Principal King of Arms and Ralph Bigland Esquire from the River Trent Southwards and Greeting
Whereas Sir Robert Seppings of Somerset Place in the Parish of St Mary le Strand in the County of Middlesex Knight eldest son of Robert Seppings late of Fakenham in the county of Norfolk esquire deceased and Grandson of Thomas Seppings late of Fakenham aforesaid gentleman also deceased both represented unto the Most Noble Bernard Edward Duke of Norfolk Earl Marshal and Sir John Henslow Knight a Surveyor or Commissioner of His MAJESTY’S Navy to learn the Art of Building and constructing Ships and having passed through the various gradations of the Civil Departments of the Dock Yards was in May 1813 appointed Surveyor and one of the Commissioners of his MAJESTY’S Navy that he having during this Period made various improvements in the constructions of ships of War relative to their form economy and durability His MAJESTY’S then Acting as ‘PRINCE’ Regent was on the 17th, august 1819 deemed to confer on him the honour of Knighthood on board the Royal George Yacht while under Sail and with the Royal Standard hoisted on the Deck: That in the same year the select Committee of finance upon Naval Expenditure after examining the Memorialist’s various Medals and improvements on shipping and mentioning the great ability of the same were pleased to conclude their Report in these merits ‘These Services although they have nothing of that brilliancy which forcibly attracts public admiration will continue to confer a lasting benefit to the British Nation long after the period when the beneficial effect of victories however splendid shalt have passed away – That the Memorialist had the honor to receive in the year 1817 from the Royal Society of London the Copleian Gold Medal, and from the Society for the Promotion and Encouragement of Arts Manufacture and Commerce a Gold Medal “for obviating the necessity of lifting Ships” and in addition to then flattering marks of Distinction He has had the satisfaction to be honored with a Jewel Ring presented to him by command of his MAJESTY the Emperor and Judiciator of All the Russias and a Diamond Ring by command of the King of Denmark and being desirous of commemorating these special marks of favor bestowed upon him by his own Sovereign as well as by foreign Monarchs by bearing such Armorial Ensigns as may have some allusion to his professional services. He thereupon requested the favour of His Grace’s Warrant for our granting and assigning such Arms and Crest bearing allusion accordingly as may be proper to be borne by him and by his only Brother John Milligen Seppings a Lieutenant in the Royal Navy and their respective descendants according to the Laws of Arms
And forasmuch as the said Earl Marshal did by Warrant under his hand and Seal bearing date the twenty fourth day of December last authorize and direct Us to grant and assign to the said Sir Robert Seppings such Amorial Ensigns accordingly Know Ye therefore that We the said GARTER and CLARENCEUX in pursuance of his Grace’s Warrant and by Virtue of the Letters Patent of our several offices to each of the respectively granted have derised and do by these Presents grant and assign unto the said Sir Robert Seppings the Arms, Mering that is to say Argent two Sea Horses rampant respecting each other proper holding between their paws or fore fins, a Triangle sable a chief wavy azure thereon an ancient Galley and above the same Trident sessways of the first and for Crest on a Wreath of the Colours a Demi Sea Horse proper gorged with Naval Crown Azure and holding between his paws (or fore fins) a Triangle Or as the same are in the Margin hereof more plainly depicted to be borne and used for ever hereafter by him the said sir Robert Seppings and by his Brother John Millgen Seppings and by their respective descendants with due and proper differences according to the Laws of Arms
In Witness whereof We the said GARTER and CLARENCEUX Kings of Arms have to those presents subscribes our Names and affixed the Seals of our several Offices this eighteenth day of February in the Sixth year of the Reign of our Sovereign Lord GEORGE the Fourth by the Grace of GOD of the United Kingdom of Great Britain and, Ireland, KING, Defender of the Faith .. and in the year of our Lord one thousand eight Hundred and twenty five.