Posted on November 26, 2017 by Katherine Seppings 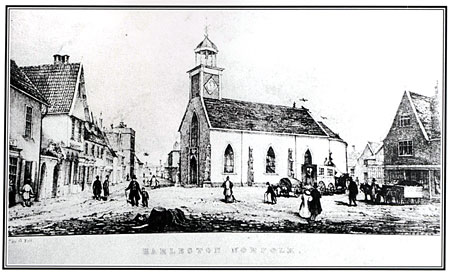 The Milligen family came from Glasgow, Scotland, to set up business and settle in the market town of Harleston, Norfolk, England, in the early 1700s. James Milligen was a Linen Draper, as was his son, John Milligen, born in Glasgow, 1694. We don’t know exactly where the family lived in Harleston, but James was buried 9 Oct 1940 at Redenhall near Harleston. The villages of Redenhall and Harleston are now a combined town covering an area of 13.73 km2. In 2001, the population was 4,058 in 1,841 households.

John Milligen married Elizabeth Smith, from Harleston, sometime before 1730. According to Faith Packard in Our Family History, ‘theirs was a happy marriage.’ They had two sons and four daughters none of whom carried on the draper’s business. ‘John retired to Shouldham near King’s Lynn where he bought himself a small estate and lived as a country gentleman.’ Shouldham covers an area of 16.04 km² and had a population of 608 in 246 households when I visited in 2001. 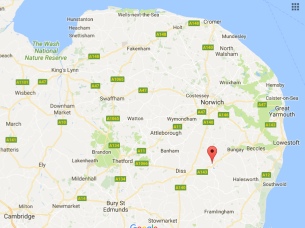 John and Elizabeth Milligen’s first born, John Milligen (b. 1730), moved to Plymouth, Devon, to become a Captain in the Royal Navy. Their youngest, Lydia Milligen (b.1740), married the Harleston cattle dealer, Robert Seppings, of Fakenham, Norfolk, in Fakenham, 1760. John Milligen, the father, died on 27 January 1762 aged 68 years at Shouldham, Norfolk, and was buried at the chancel of Shouldham Church in a family vault. The All Saints church is outside Shouldham in an elevated position overlooking the village. Built from a mixture of Carrstone and flint, the tower dates back to the late 13th/early 14th century. 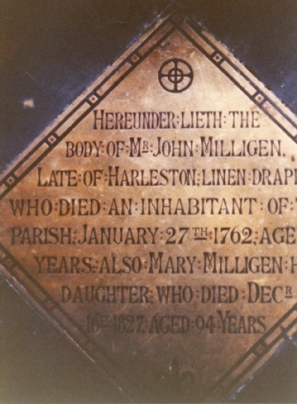 In the aisle of the church is a brass plate with an inscription honouring the bodies of John Milligen and his unmarried daughter, Mary (1733-1827), lying beneath.

Faith Packard made a three cushion canvas work sedilia seat for Shouldham church to commemorate both John Milligen and his grandson Sir Robert Seppings. The sedilia seat was dedicated by the Bishop of Ely on his visit to Shouldham in 1973. 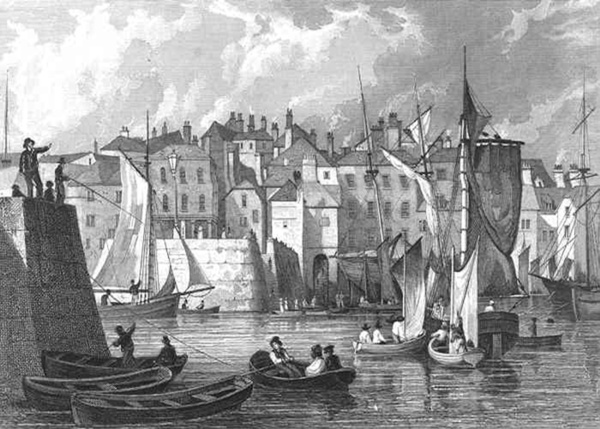 Capt John Milligen married Martha Phillips in 1759 in Plymouth, Devon. After his father died in 1762 they were well-off with money inherited from his father’s Will. They had no children of their own, but in 1780, at age 50, the captain adopted two of his sister Lydia’s children – Lydia Seppings (b. 1762) and John Milligen Seppings, age 10 (b. 1770) who was placed in the navy as a midshipman on Dunkirk, a store ship under the command of his uncle. When his father, Robert Seppings, died in 1781, age 47, Capt John Milligen adopted his older brother, Robert, age 14, and their six-year-old sister, Elizabeth. In 1782, he put Robert Seppings to work at the naval shipyards at Plymouth as an apprentice shipwright. He also adopted two orphaned daughters of his brother Thomas Milligen – Martha Phillips Milligen (b. 1766) and Charlotte (b. 1770) who would later marry her first cousin, Robert.
We don’t know where the Milligens and Seppings actually lived in Plymouth – many records were destroyed in WW2 – but it could have been at No 28 Gasken St. 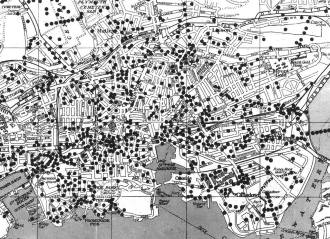 Capt John Milligen died in Plymouth in 1788. In his Will, he bequeathed ‘his house etc, to his wife Martha Phillips Milligen and his niece Charlotte Milligen’. One year later, John Milligen Seppings drew up his Will. At 18 years of age, he wished to leave his worldly estate to his Aunt Martha Milligen who was then residing at No. 28 Gasken Street, Plymouth. The house was probably destroyed during the Plymouth Blitz, 1941, as it no longer exists.

4 Responses to Where the Milligens Lived